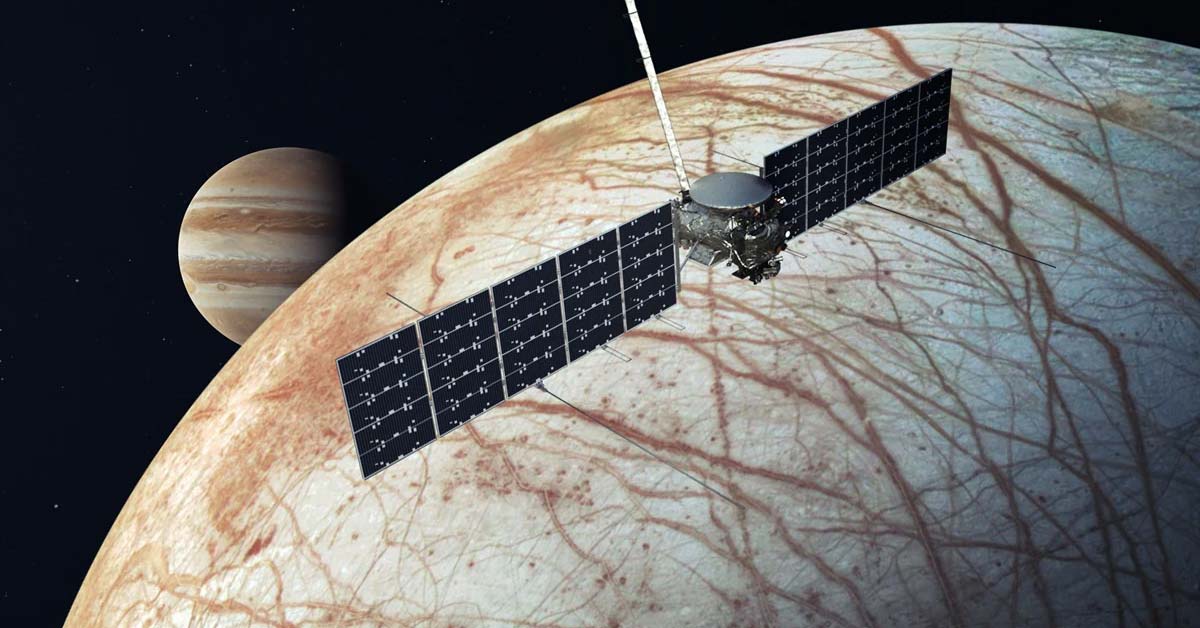 It’s common knowledge that life on Earth depends on water (liquid) and a combination of ‘biogenic’ elements like carbon, in addition to sources of free energy. In an attempt to find a hospitable environment for life, scientists have measured the magmatic activity of the seafloor of Europa (a moon of Jupiter) and demonstrated it numerically using a three-dimensional model to prove that the magmatic activity of Europa could continue throughout its history till it slowly decays (as interior cools down), thereby affecting oceanic chemistry.

Jupiter’s Icy Moon Europa has been believed to harbor a subsurface ocean of liquid water whose volume is double that of the size of Earth’s oceans. It is one of the smallest out of the four moons orbiting Jupiter, slightly smaller than our moon, this is the 6th largest moon in the solar system. It has an icy water crust and an iron-nickel core. Its outer atmosphere is consisting of a thin layer of oxygen. Some other biogenic compounds that are found here include carbon, hydrogen, nitrogen, phosphorous, and sulfur. There is some evidence of the presence of sulfuric acid, magnesium, and sodium sulfates or carbonates too.

Another requirement for life to sustain here is the presence of free energy sources, and Marie Běhounková suggests that deep down the thick icy and salty ocean, its rocky mantle could be hot enough to sustain volcanic activity and it could be hot for more than 4.5 billion years. This study could be another evidence for the possibility of life prowling on Europa’s seafloor. Marie, a geophysicist from Charles University in Czechia believes that their findings provide, yet another evidence that Europa’s subsurface ocean may be an environment suitable for the emergence of life.

Europa is the point of attraction because it is believed to be one of the remarkable and scary planetary body might have sustained its volcanic activity for over a billion years and possibly the only one beyond Earth that has such huge reservoirs of water and prolonged energy sources.

The extremely cold temperature of -140 degrees Celsius couldn’t mean that life can’t thrive on Europa, because on Earth, even in the cold polar regions, where the sun never shines, and no photosynthesis is possible, life has found a way to bloom. Chemosynthesis has been sustaining life as the bacteria can harness the energy from geochemistry instead of solar energy to yield food. These bacteria start the food chain and ecosystem attracting other organisms that feed on them.

Researches used detailed modeling to simulate the evolution and heating of Europa’s interior and found that there are different mechanisms involved that are preventing it from freezing completely. It involves the heat emission from radioactive decay of elements from the mantle, which results in the moon’s internal heat. Additionally, the elliptical orbit of Europa around Jupiter generated tidal forces that must have exerted stresses on resulting in ongoing activity inside Europa. This flexing results in heat production that would be sufficient for melting rock into magma, thereby inducing volcanic activity, particularly in the polar regions with higher latitudes. To prove it all, a spacecraft has to land on it, for which we have to wait a few more years.